As with many things in life, humans place importance on dates and milestones. Birthdays, anniversaries, and historical dates have become tradition and most expect something special to happen on one of those days. If it's not a surprise birthday party, an anniversary date celebrating a moment in a rationship, or even a national, global, or religious holiday, humans love to acknowledge a day that often took years to arrive.

Scuba is no different. Learning to scuba dive comes easy for some, with trials for others, and for those that continue diving see milestones as way way to judge their progress and reward themselves for making it to the next year, next certification, or next dive number. For me, the milestone of dive number 100 met me with excitement but also fills me with grief. There really isn't a way to know how long it will take to get there as I got to 100 dives in 9 months. Most of my students do 4-6 dives during certification then often 6 dives on a vacation destination. That usually wraps up their year. I encourage my students to do at least 24 dives a year.  24 dives a year should be able to fit into anyone's schedule as it works out to only two dives on any one day in a given month. 24 dives a year is twice the minimum recommended from the "NAUI Safe Scuba Diving Practices" guide.

If everyone dove at this rate, it should take around 4 years to reach 100 dives, much longer if you don't. If you think about other things that take 4 years to complete, we could include: high school, a bachelor's degree, the arrival of the next Olympic games, the presidential election, and for those that have children, watch this video to see all the milestones this father sees in his son over four years (teething, walking, talking, potty training, and overall growth).

When you look at it this way, four years is a long time. The amount of things one can learn in that time is stupendous...!!! However, if you think about the time the diver comits to diving, it is realistic to assume they have 66 hours under there diving education belts the first year (8 hours of self-study, 6 hours of review with the instructor, 6 hours of pool, 16 hours of open water, and 30 hours on the next 20 dives - - allowing for setup, the dive, debriefing, breakdown, for each dive and that's being generous - - assuming that everyone will learn something on dive days during the half-hour not in the water. In-water dive time the first year, supposing that each dive was an hour in duration (which would be very unlikely) is 24 hours.

At this point it starts to become confusing as to what was really learned in that time because it is more likely that anyone with less than 100 dives thinks they are just diving, just fine, and rarely evaluates their progress. Similarly, it is very likely that the only time that a diver practiced all of the skills introduced to them in the first year, was in the first year...

I've asked divers to reevaluate their skills at 100 dives, but haven't gotten any takers.

What does all this mean? It means that scuba diving as a recreational activity is not taken seriously.

I mentioned earlier that a 100th dive milestone met me with grief. I was present at a divers death on his 101st dive. The death was due to diver error. There was no failure of his equipment...

We don't celebrate dive number 25, but dives 25, 50, and 75 are equally as important. I encourage everyone to keep their skills sharp, practice what was learned in open water, continue your scuba diving education (during your first four years, if not longer), and if you ever feel that conditions are beyond your skill, comfort, or ability, end the dive.

Email ThisBlogThis!Share to TwitterShare to FacebookShare to Pinterest
Labels: don't be complacent, practice your skills regularly., Your 100th dive

Search & Recovery... How it's done on a real job... The process, procedures, progress, and reality of trying to find something in zero visibility.

I was contacted yesterday by a father to look for a GoPro that his son lost in Lake Oswego about a week ago. Lake Oswego is a private lake in the city of Lake Oswego. It is a man-made lake and has areas for boating, family gatherings, and other water activities. 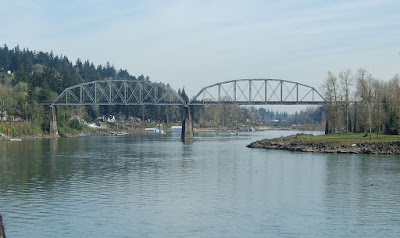 
The young man was playing in one the community swimming areas and the GoPro came off of the harness he was wearing.

I make it a policy to totally inform the customer what to expect with this kind of search and recovery job. $100 is collected in advance, and $100 is collected upon arrival. The reason I set the price high is that doing a dive like this has risk, potential for injury, possible entanglement hazards, the occasional overhead environment (in this case, the boat dock), loss or damage of my dive equipment, and gas cost (air fills). Each party (me and the paying customer) agrees that they will wait on the dock until I am totally out of the water. Our agreement includes how long I will look for (I only will dive on 1 tank, leaving a reserve), there is no guarantee that I will find the item, and that there are no refunds of any kind for any reason.

The job begins by arriving at the location and having the customer take me to the site in which the item was lost. They tell me where they think the item went down and any other information about the area that could help in finding it. All my gear is brought down to the water and assembled. I have been in Lake Oswego before and the visibility is 6 inches, or none. Today, the water temperature was warm enough for a wetsuit, but I always wear a drysuit. The other equipment I bring with me is two dive lights, scissors (cutting tool), hood, line on a finger spool, lift bag, and dry gloves.

The customers wait on the dock while I am doing the search and recovery. The bottom of this area is basically silty and even before kicking up anything from the bottom, there is only a foot of visibility, if that. I have to descend slowly as to keep from kicking up the bottom, but since the silt is mud, it is inevitable since I will be crawling on the bottom. I use my dive light to look directly in front of myself and navigate in the appropriate search pattern for the topography of the bottom. The compass is necessary as it is easy to swim out of the swim area as well as getting lost or disoriented. I try to position myself about 6 inches off the bottom. There are pylons that support the dock, but they are impossible to see until you are in direct contact with them. Going under the dock can be dangerous as there are boats that are moored on the other side of the swimming area.

If there was visibility, using line could be helpful, but in this case, line would only create an entanglement hazard and be very dangerous. There are other things that I will occasionally come across, but I don't pick them up until I am ready to exit the water. Picking them up would add the siltiness and anything that is buried in any amount of the mud will pull up a large portion of the bottom. I can't emphasize how important it is to not create entanglement hazards using line.

I try to use the customer on the dock to assist in navigating by banging on the ladder that goes into the swimming area, but the bubbles from each exhalation make it almost impossible to differentiate any noise. By the time I reach 500psi, it's time to start wrapping up my searching efforts and anything I find on this last round will be brought to the surface. This time, I found a plastic chair, a shoe, several toy squirt guns, a boat paddle, children's toy fins, and several pieces of garbage. Exiting the water requires a climb up a vertical ladder. Climbing a vertical ladder with 50lbs of gear is very difficult and without aid, might mean I have to get out of my wing and harness. Most classic harnesses are difficult if not impossible to get out of in the water. I could cut myself out of it, worst case scenario. If I did, there would be no way to get my gear out of the water as there is a drop from the boat dock to the top of the water.

The search realistically became an exercise of luck, hoping to come across the camera by chance, hence, why it is necessary to always let the customer know that there is no guarantee of finding the item and always getting paid in advance. Search and recovery in limited visibility is difficult while in no visibility is precarious. There aren't any intake valves in the area, but there are ropes and cables that were used to secure the dock. Anyone who is uncomfortable in zero visibility would be wise to avoid this kind of environment, not to mention anyone that isn't familiar with cutting themselves free while not being able to see what you are cutting.

The job comes to an end as I disassemble my gear and load it back in the truck. Search and recovery for fun is a great skill to have, but as with all diving specialties, be sure to weigh the cost of the job to your skills, comfort, safety, and time. I've known people to offer their services for as little as $50. With all that is required in a dive site like this, I would never do it at that price. If you ever have the opportunity to do a search and recovery job, remember some of the things I've mentioned here and have fun.